VAZ-2108 – a three-wheeled passenger hatchback developed at the Volga Automobile Plant in the late 70s, the car was radically different from the Volga classics and other cars from the times of the USSR.

The designers of the VAZ plant designed a new car from scratch, the body shape received chopped features a la “Chisel”, which corresponded to the spirit of the times, and most importantly, the front-wheel drive scheme was finally implemented.

The developers recreated a short-winged figure-eight with a low panel, the authors used a good 3D model and HQ quality textures. The original interior was implemented, 1 engine was added, 5 tbsp. Gearbox, 2 types of wheels, 2 types of tires, and two types of headlights.

Changes
Adapted to 1.45
Added turn signals on the wings,
Added metallic color
Fixed wipers now clean the glass as it should
Handling improved
Doggy added
Added vinyl to rear window
Added glass animation in the interior, but only on the driver’s side 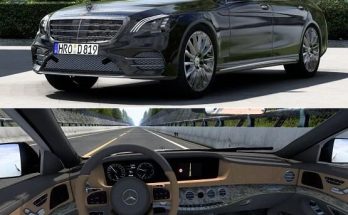