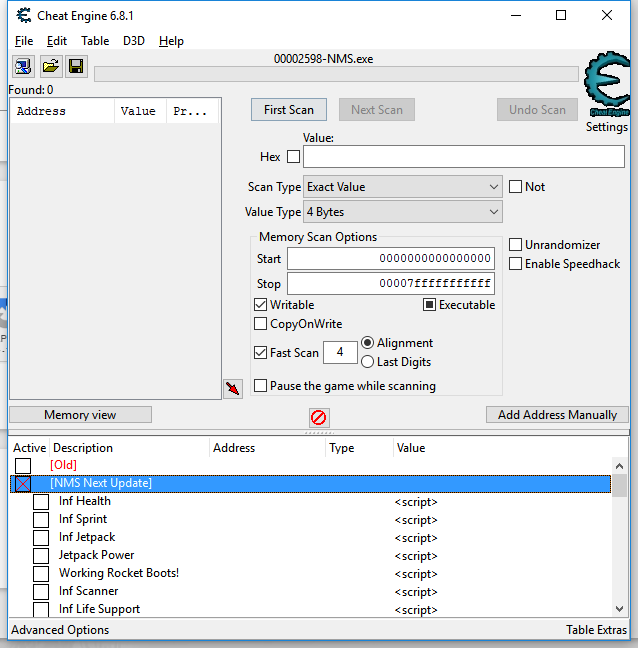 THIS IS NOT MY TRAINER, I ONLY POST UPDATES REGARDING THE CHEAT!

Download and install the latest version of cheat engine from https://www.cheatengine.org/
Download the file (mod)
Open the downloaded file
Click the ‘select a process to open button’ (image: https://i.imgur.com/mroeQTD.png)
Find and select No Man’s Sky on the process list.
In the bottom window of the program, you will see [Old] and [NMS Next Update]. Click the [NMS Next Update] – the full list of cheats will expand. You can then enable / disable whichever cheat you want.

Update 47 – Fixed some of the basic cheats, but I still have a LOT of work to do. So much has changed with this update I have to start over from scratch.. I’ll have more done later tonight.

Update 48 – Updated with a few more cheats, such as Ignore Crafting Requirements(Tech/Prod Only), Bypass Locks, and some more Inf stuff. Added pointers to Nanites and Quicksilver, they seem to be treating currency a bit differently now! Fixed a bad edit with Current Inv Stat Pointers.

Update 49 – Added Always Have Jetpack Power Surge, Inf Blaze Javelin, Inf Deflector Shield and Ignore Materials For Damaged Components. Also added Always Have Conversation Item, but this needs further testing for products, I’m almost sure this is the case. But not having the correct Item ID’s makes thing hard for testing. I made some decent progress on the dropdown list for the element/product section. There is just so much new content it’s overwhelming! Ignore Crafting Requirements for base building products is being an asshole right now. Even though I’ve forced the conditions true 3 different ways, it still wouldn’t let me craft anything. Maybe I just need to try this on a clean save..

Update 53 – WITHIN MINUTES!!!! Updated for whatever update!

Update 54 – Fixed an issue with Ignore Crafting Requirements for base building items. Everything should be craftable now. Some might say you still don’t have the required materials, but you’ll still be able to craft it. I’ll work on the cosmetics later. Added Stack Mods based on findings by @MojoW. Added a function, found by @cedricvdg, that allows mouse-overs on elements and products to the Highighted Item Pointer.

Update 55 – Fixed an issue with Always Have Conversation Item. Possibly fixed the issues GOG users were experiencing, need feedback on whether it worked. Still sifting through Item IDs for the DDL.

Update 57 – Added Teleport To Custom Marker. This is to be used only with the custom map marker, not other marked locations. The script can sometimes pick up on those locations you have marked so keep that in mind. I’m not going to delve into detail of how coordinates work in this game, but if you have any questions fell free to ask. My blink script is nearing completion as well, but as of right now its only picking up on certain object collisions. The dropdown list is almost complete, all the important items should be in there! If you notice something is still missing from the list, grab the ID of the item and let me know.

Update 60 – Fixed a couple scripts for the GOG version.

Update 63 – Fixed disable issues with Working Rocket Boots and Jetpack Power. Added Always Summon Freighter Battle and Kill All Pirates, made by @cedricvdg. Added Set Items To Max, made by @igromanru. Added One Hit Kills due to popular request.

Update 66 – Updated for 1.57 version (now all the feature work properly)