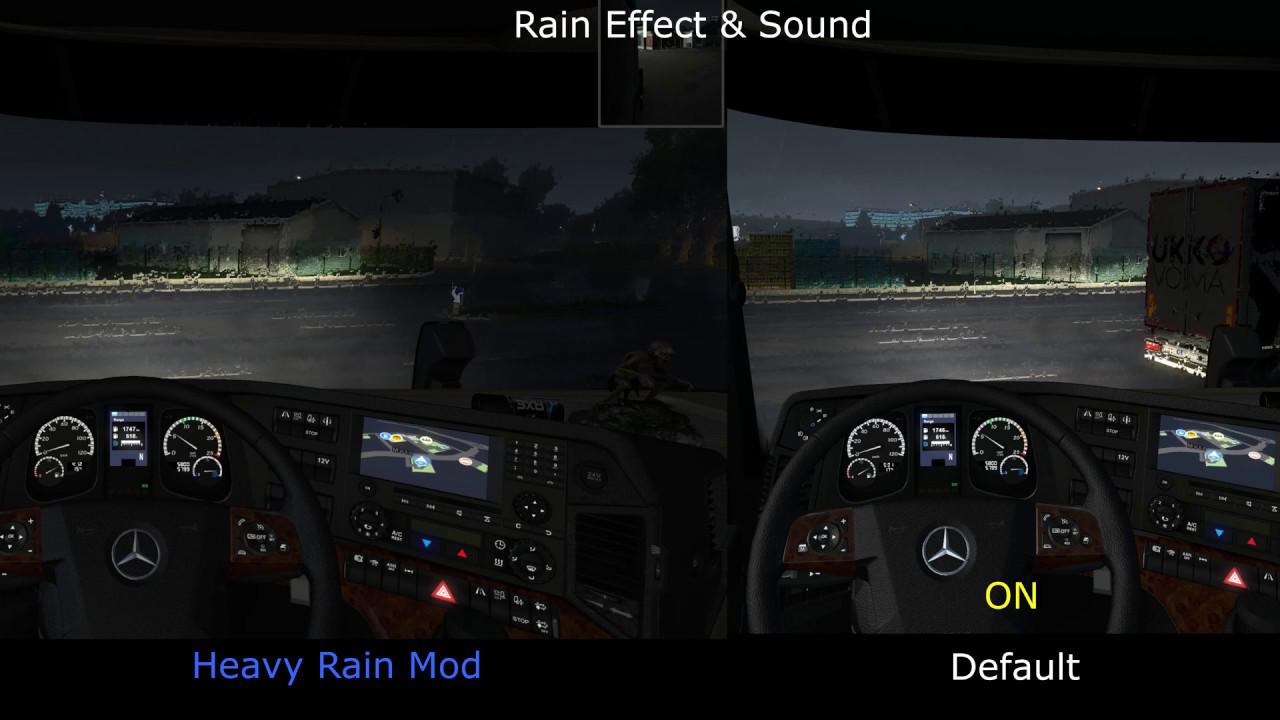 – Improved textures of raindrops from inside cabin (windshield & windows)
– Increased amount of raindrops on the windows
– Improved textures of rain (outside)
– Better effects and behaviors of the raindrops on the windshield and windows
– Improved water particles/spray textures of the wheels (Truck and AI Traffic)
– Realistic rain sounds: Rain falling in the cabin, and different sounds for “outside” rain
– Realistic thunders sounds & greater variety (about 20 high quality sounds/samples)

Changelog v4.4
– Compatibility for 1.46 game version
– Improvements in water particles when the asphalt is wet
– Improved textures and behavior of raindrops (windshield and windows)
– Increased the amount of raindrops
– Optimizations of some textures for better performance
– Others small improvements and adjustments

– Improved textures of raindrops from inside cabin (windshield & windows) higher quality and more defined textures.
– Increased the amount of raindrops on the windshield and windows
– Better textures of the exterior rain, better color, transparency and shorter “lines”
– Improved the effects and behavior of raindrops on the windshield and windows
– Improved textures water particles/spray of the wheels when the asphalt is wet (Truck player and AI Traffic)
– Dynamic exterior and interior rain sounds. different samples, effects and transitions according to the intensity of the rain.
– High quality thunder sounds, about 20 different sounds of great variety, delay included between 1-5 seconds, simulating IRL.

Changelog v4.2
– Updated for 1.45 version
– Adjusted rain sound level from inside cabin camera (the sound level has been reduced)
– Small adjustment of the visibility of raindrops
– Add ‘manifest file’ for Optional MOD Support for Convoys

Changelog v4.1.1
– Changes from the previous version to the thunder sounds have been reverted
– Other minor adjustments to the visibility of raindrops on the windshield

– Compatibility for 1.41 Open Beta
– Rework of some textures: Greater quality and definition in the textures of the raindrops, also on the particles of the wheels, etc.
– Other minor tweaks
– Improved textures of raindrops from inside cabin (windshield & windows)
– Greater amount of raindrops from inside cabin
– Improved textures of rain (outside)
– The effects and behaviors of the drops on the windshield and windows have been changed
– Improved water particles/spray of the wheels when the asphalt is wet (Truck player and AI Traffic)
– Realistic rain sounds: Rain falling in the cabin, and different sounds for “outside” rain
– Realistic thunders sounds & greater variety (about 20 high quality sounds/samples)

Note: Thunders will be heard in an interval between 1 to 5 seconds when seeing the ‘flash’ (lightning), simulating as IRL

Changelog v3.9.2
– Fixed: Other sound mods caused the rain sound to have cuts/silences. This should now be fixed.
– Other minor adjustments

Changelog v3.9:
– The number of raindrops on the windows has been slightly reduced
– Slight changes in the behavior of the raindrops
– FMOD: The sound of rain falling in the cabin has been improved (sound level, better transition for different intensities
– FMOD: Some improvements in thunder sounds (sound level, better fading effect, added some new sample

– Fixed spray/particles of the wheels when used in OpenGL
– Support for the latest versions of Sound Fixes Pack by Drive Safely (Thanks mate!)
– Small changes in the behavior of the raindrops

Changelog v3.8.1 for 1.40:
– Some small changes in the behavior of the raindrops:
The appearance of drops on the glass depending on the speed of the truck is now more realistic
Slightly increased the appearance of drops on the windshield (but they will also disappear sooner when there is no rain)
– Better opacity of the raindrops
– Texture water particles/spray has been changed
– Some textures and parameters/values have been adapted to the new 1.40 lighting
– The sound of the rain falling in the cabin has been changed

Changelog v3.7:
– New texture raindrops (windshield & windows) created by me
– Some tweaks for windshield effects
– Addon for RGM by Frkn64

Changelog v3.6:
– New texture raindrops for windshield & windows (Thanks to AleyxeP for main texture)
– Reworked (“exterior”) rain texture & values for 1.38 version
– Fully reworked values for windshield effects
– Increased number of raindrops
– This version will use the old particle/spray effect of the wheels, better compatibility with other mods and better performance.
– Added some new thunders sounds
– Equalized and tweaked the delay of thunder sounds

Changelog v 2.7:
– Minor tweaks for Windshield effects (all versions)
– Added version: Realistic Rain LITE for NaturaLux
– The “Smoke” file is removed, is not necesary in last version of NL

Works with any Mods Maps

Changes v2.6
– Some smalls tweaks to the windshield (all versions)
– Added more thunders sounds (all versions)
– Added: New version Realistic Rain for NaturaLux Mod, In this version the file of the rain spray particles has been deleted, the particles included in NaturaLux will be seen. Also added “smoke.pmg and pmd” files, the color of the rain spray particles will look correctly (thanks Kirill for the info)

HOW TO INSTALL:
IMPORTANT!!!! Put Heavy Rain in your mod Folder and ACTIVATE IT AS HIGHT PRIORITY!! (Top)
place THIS MOD above mods like Nextgen, RGM, Weather mods etc. 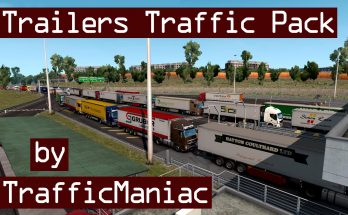 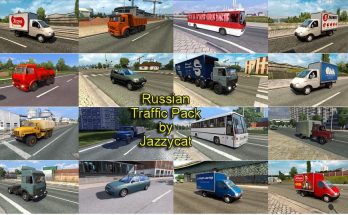 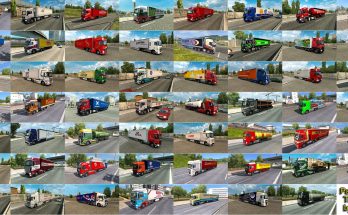