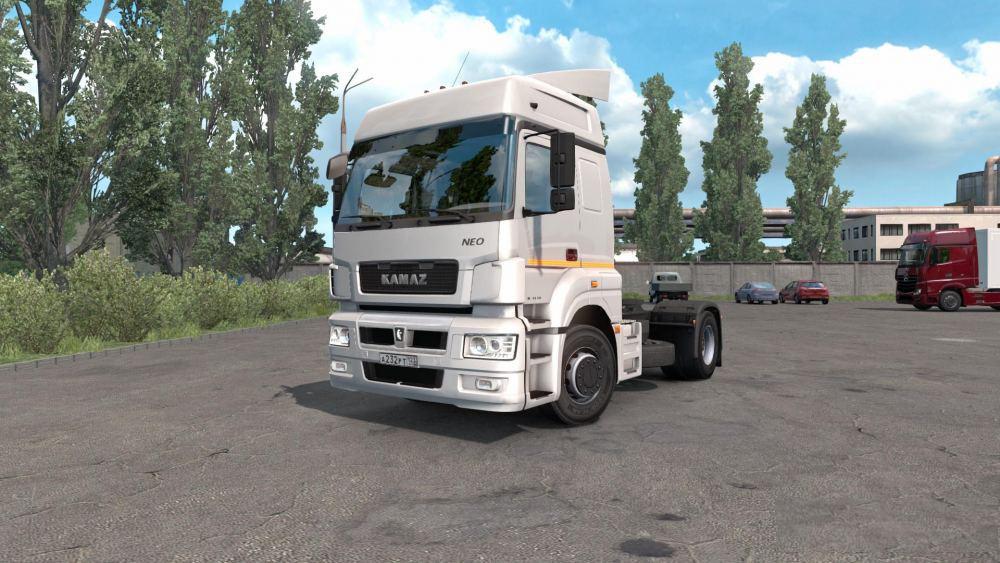 Model of the Russian mainline truck KAMAZ 5490 Neo and 65206
The model has its own interior,
its own original sounds,
a small variable tuning,
and its own on-Board computer

changelog:
– added support for some new elements from the updated DLC:Cabin Accessories ETS2,
– added inventory support from Christmas Wise Giving Event 2020,
– fixed font size in the onboard computer,
– added own (offline) settings for Navigation from smartphone, which do NOT affect other trucks,
– other minor fixes..

Attention!
In this version of the mod, there is NO:
– green tinted strip on the windshield;
– side window animations.

Added support for kamaz-5490NEO65206 to the package of default trucks Dimmed Headlights by Grimes.
If you ONLY use KAMAZ, this add-on can be connected WITHOUT the main mod.
– tested on game version 1.39.2.1

Changes 29.07.2021:
The adaptation for the new versions was carried out, the problem related to the headlights was fixed, other fixes were made.

From unresolved: still no animation for opening / closing side Windows. The sound (sound effect) is there, but the animation itself is not.

The mod is adapted for patch 1.37, with its new sound system (FMOD).
(unofficial update)

=Adjusted the weight (and physics) of the truck to match the complete set of the chassis.

If desired, you can assemble any set of available items: chassis+engine+gearbox+cab.

=The truck is registered in the dealer cent of Mercedes-Benz – now you can buy it in different ways:
-by visiting the dealer in person,
-and (or) remotely via the “modification Brands” menu.

From unresolved-there is no animation for opening/closing side Windows. The sound (sound effect) is there, but the animation itself is not.

author of the adaptation: dobr4060

Update from 02/05/20:
– Changed the geometry of the front bumper, headlights, fenders,
– improved textures,
– bugs fixed
– nameplates are fixed (now each cabin has its own nameplate, where the nameplate M is the High cabin, the nameplate T is the Low cabin),
– improved running lights,
– added new paints,
– optimization is slightly tightened,
– other model improvements

Update: -Fixed holes in the cockpit(fix of 3d model)
– Fixed flickering texture of the steering wheel and shelves in the interior
– Fixed collision of truck 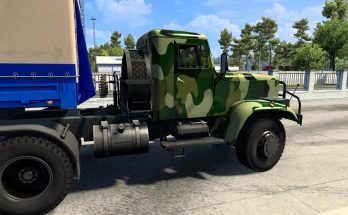