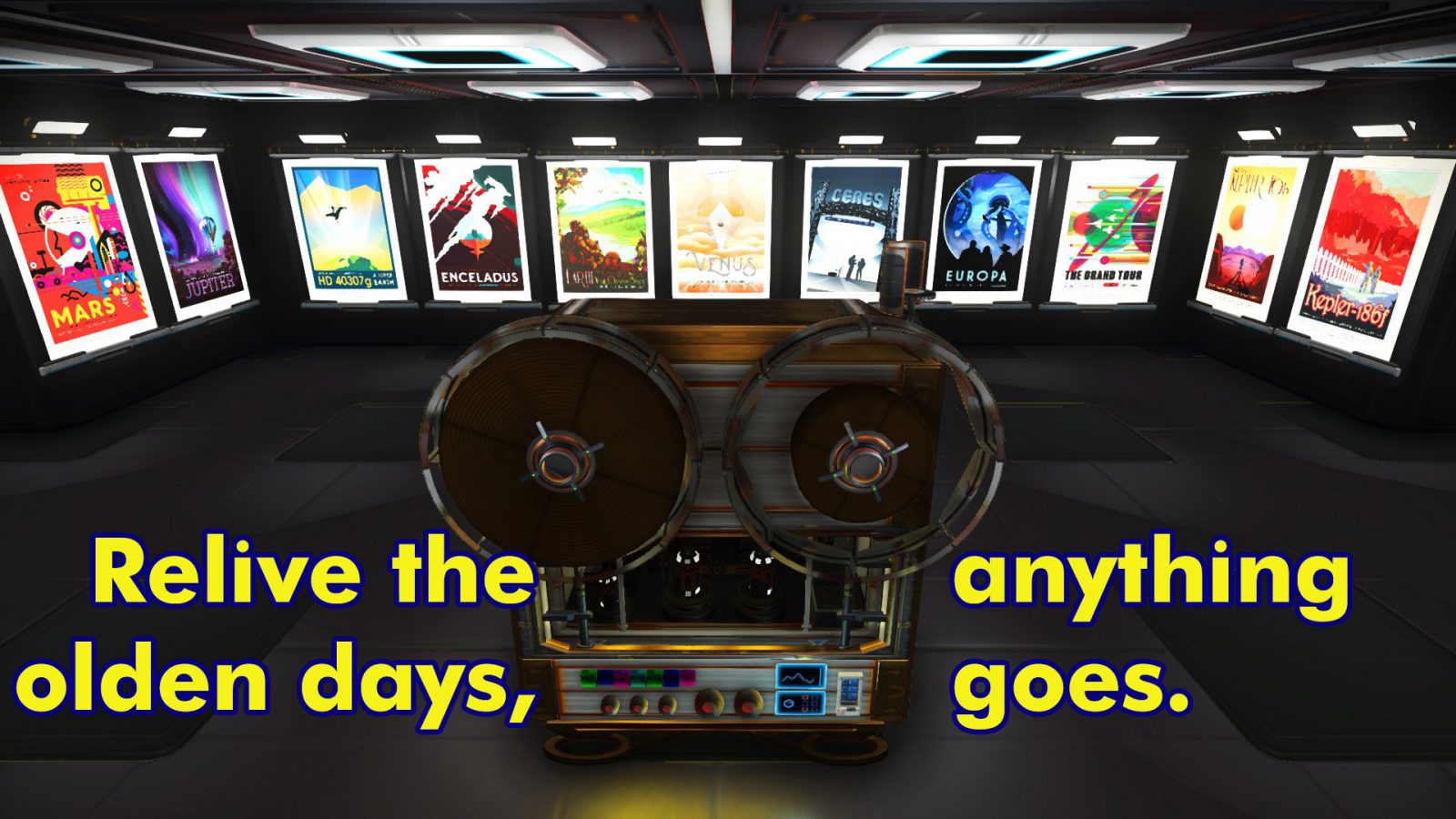 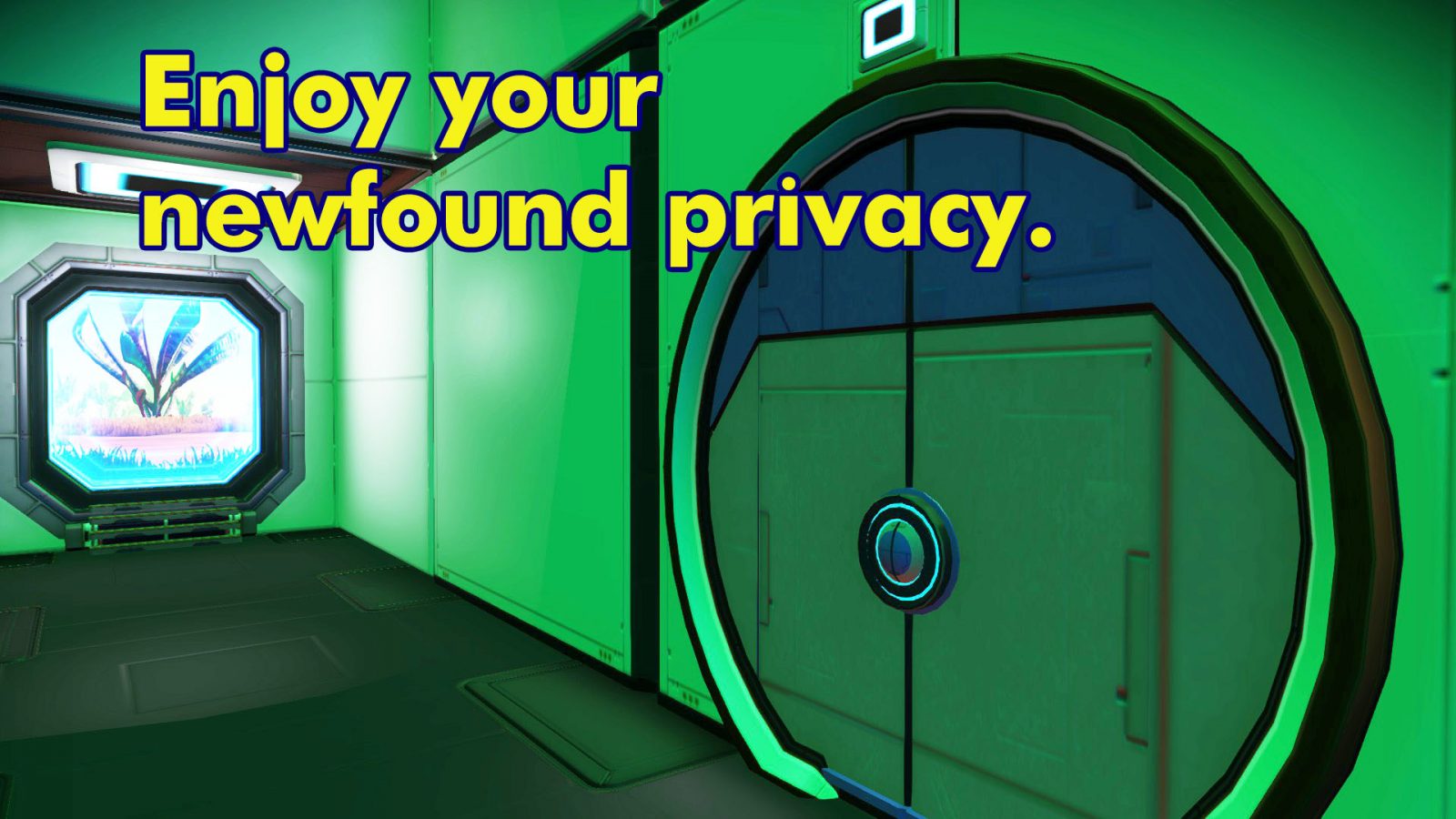 Eucli-ea adds 401 new buildable objects that are either already present in the game but were not made available to players, or new flags and emblem with different themes.

This mod currently adds:
199 additional decorations;
13 interactive decorations, these decorations include crates and boxes that give the player materials or technology;
116 gardening plants and rocks;
11 types of NPCs;
51 new flags and emblems;
The Direct Unified Materialisation Protocol (D.U.M.P.)™ Station that can be built anywhere, allowing freighter storage access anywhere! Go to the Tech category to build it;
58 letters and punctuations;
There are rumors lately saying that there is a faint voice penetrating the cosmos, seeking its chosen one… Perhaps one would only find the source of the voice in the most anomalous or places.
2 new valuable products: Niteliosis Chip and Tychronite Crystal
Safes spread throughout the galaxy, which when drilled grants player valuable rewards

Available as a standalone mod, or as an addon for BOTH theFisher86’s SimCity 5300 and Kremit’s GrowMoar mod. Now also incorporates Kremit DeFrog’s Fix BluePrint Vendor. Hello Games fixed the issue in 1.3 after we’ve addressed this issue in several occurrences, thanks, we’ve had a good run!

Most of the objects will be present in your build menu when you open the game, to get interactive decorations, go to your base shop and buy the decorations.

Other files are newly added and should not interfere or be interfered with other mods.

theFisher86 for making the glorious SimCity 5300.

monkeyman192 for helping me find out many secrets in the MBINs, many decorations would not exist without his help!

Nadalee for the suit model, that really makes the chamber shine!

Both mods inspired me to make this standalone mod, which originally started as just the SimCity addon.

Everyone who created the emblems and flags for the Galactic Hub, you are the ones that make this mod possible in the first place

This mod’s compatibility version uses part of theFisher86’s SimCity 5300 and Kremit’s GrowMoar, the respective parts of the mod will be removed upon the mod authors’ request.

Version number is now independent to SimCity 5300’s as the amount of added objects got out of hand.

I personally will not likely update this mod for Darc Tech, as I’m using 40 other mods and therefore don’t use Darc Tech myself. However, the process of making any mod that adds buildable objects are rather simple (you literally copy & paste some text and be done with it), so if anyone is willing to make this mod compatible with Darc Tech, I’ll be more than happy to share my experience and give instructions.

morgvom_org and 7101334’s flag and emblems are licensed under CC-BY-SA, so their flag and emblem textures and the mod itself is released under the same license. However, anyone who wishes to include this mod in their compilation MUST remove all the additional emblems and flags from the mod, as well as the Suit Chamber, as those are the works of other creators and I have no control nor authority over their release other than in Eucli-ea itself. I have the right to take down any mod that includes these files, you have been warned.

Download the mod
Unzip/open the downloaded file
For the standalone version, put “__MOD.Winder.HubFlag.pak” into your No Man’s Sky mods folder;
For the SimCity 5300 and GrowMoar addon version, YOU MUST HAVE BOTH MODS INSTALLED OR IT MAY CAUSE INSTABILITY OR CRASH YOUR GAME. Put “__MOD.Winder.HubFlag_SCTree.pak” into your No Man’s Sky mods folder, and make sure it’s alphabetically higher than SimCity 5300 and Grow Plants for Farming’s pak file so that my mod is loaded first
(Optional) put “_MOD.Winder.HubFlag_CubeSnap.pak” into the mods folder to enable paving/cube infrastructure to Cuboid Rooms snapping abilities.
(Optional) Delete everything in the SHADERCACHE folder
Happy times

If anyone would want to help me on making the mod, find me on discord: @WinderTP#7241

I welcome anyone in a No Man’s sky community to ask me to add their flags or emblems, I’ll consider them if they match the game’s general aesthetics.

08/09/18 1.8.1 “The Old, The New, and The Chroma Key”:
Incorporated Homesick’s Tech Plus (https://www.nexusmods.com/nomanssky/mods/770) with a few tweaks, love u bb
Also tweaked Exocraft Terminal placing mechanics so they can be placed regardless of collision (not mesh)
Fixed minor issues with multiple models
Added 4 new Emblems and Flag
Oxalis Emblem by Acolatio
The Colonial Fleet Emblem and Flag by Choopsha
Arctifices Caeli Emblem by yours truly, Master of the Dookie Tent
Added 45 new decorations
1 new Globe Projector in Special Decorations, available for purchase in Blueprint Analyser
4 new Chroma Key Walls and Floors in Special Decorations
17 new plant in Gardening – Plants 2
23 new decorations in Additional Decorations 4
Tweaked vanilla Worktop collision cos it was annoying me
Tweaked some recipes

Notes: from the experiments of my fellows and I, I am proposing that NPC will not spawn in Uncharted or Abandoned systems.

12/10/17 1.7.2b:
Adjusted mission canceling parameters so that playing being inside their ship (even when landed) is considered quitting mission, preventing players from exploiting sentinel behaviours
Recompiled MISSIONTABLE with newest MBINcompiler

30/09/17 1.7.2 “The Thermal Drill, go get it”:
Added 2 new categories
Gardening – Plants 2
Gardening – Rocks 2
Added 38 new decorations
7 plants in Gardening – Plants 2
25 rocks in Gardening – Rocks 2
1 Thermal Drill decoration in Additional Decorations 3
3 mission shop decorations in Additional Decorations 3
2 circular Atlas Altars in Special Decorations, blueprints needs to be purchased
Added safes in Drop Pods, Waypoints and Crashed Freighters
Safes have a individual low chance to spawn in the mentioned locations
Safes give players rewards of high values, the higher value, the lower chance of receiving
Added door and safe drilling to specific doors and safes
Doors in Manufacturing Facilities and Operation Centers now requires 15 seconds of drilling
Safes in the wild now requires 60 seconds of drilling
Players will gain wanted levels from drilling
Abandon drilling by flying away with spaceship or driving away with exocrafts
(Note: Please refrain from drilling more than one safe at the same time, and open the safe once drilling is finished to complete the mission)

12/09/17 1.7 “Finally Stable”:
Updated for NMS 1.36
Fixed all entity files, making Eucli-ea a stable release
Fixed vehicle scanner not being able to be built, thanks to Forkinator for letting me know the issue
Updated _SCTree compatibility version with SimCity5300 (also makes it usable in 1.36)
SimCity’s TECHPANEL object has been removed due to it conflicting with vanilla TECHPANEL object
Kremit’s Grow Plants is not updated to AR due to him being tired of whiny bitches, can’t say I’m surprised. Be better people and he may come back

02/09/17 1.6.B6:
Updated to NMS 1.35
Don’t ask why it’s still in ?️lpha but I’m not doing anything new, the the creators of the tools has decided the files I use that needs updating aren’t of priority, then I will respect their decision and Eucli-ea will stay in ?️lpha

25/08/17 1.6.B4:
Updated files for NMS experimental 1.34
1.33 version is now named _Alpha_1.33 and will not be updated further (this update inclusive, which means the following changelog does not apply to _Alpha_1.33)
Added Sceptic NPC into NPC category, available to buy in base blueprint vendor
(Remind me to add the emblems and oversized garage doors I promised thanks)

23/08/17 1.6.B2:
Added “Cyunsunghei” Small Portal in Special Decoration, purchasable in player base vendor
Removed “Saicyunsung” functionality because of crashing issue
Updated all building ingredient requirements so that all objects are buildable again

22/08/17 1.6.B1 “Uhh… ?️lpha?”:
Updated all existing scenes
Tube Suit Chamber has suit missing because of outdated geometry and tools
Updated 6 icons
Stable release, nothing should crash unless otherwise specified
Certain non-essential tables from 1.2 not included to improve stability
Because of this, new users will not be able to receive many of the blueprints at the moment, tough titties
Some data in entities missing because of MBINcompiler issues, causing some objects not reacting, or some objects switching modes back and forth (e.g. Disco objects becoming epilepsy inducing-fest), they will be updated after the compiler has been updated
New small stargate function – interactions with it should be identical to an actual portal
Issue: possible crash upon selecting the option “activate portal” for currently unknown reason, but if you don’t touch it, the game should not crash

21/08/17 1.6.A3:
Updated files in ATLASSTATION, BL_GLOBE, BL_SUITCHAMBER, FACTORY, GARDEN, INTERACTIVE, LAYOUT, NPCS and UT
Over half of scenes updated
Added a previously not added Rock Slate into Gardening – Rocks
Changed out two medium rocks as the previous ones disappeared from the vanilla files
Korvax spawning in non-Korvax systems is still bugged, therefore the previous circumvention method will not be modified for now
Icon update to follow after all scenes have been updated

20/08/17 1.6.A2:
Updated files in DISCO, ATLASSTATION, BANK and TAPEDECK folders
many entities are broken for now as per MBINcompiler issue, will be updated after most/all scenes are updated
Added Additional Decoration 3 category, moved some objects to said category
Added 2 CCTVs and 1 green monitor in Additional Decoration 3
next update plan: more complicated objects while my voluntary associates work on simpler scenes
Updated _CubeSnap as per a collision issue of the doorway

18/08/17 1.6.A1 Update Alpha:
Only updated standalone non-compatibility version as mods for _SCTree has not been updated yet
1.6.A Alphas are has the suffix “_Alpha”, and 1.2 Versions now have the suffix “_1.2Legacy”
Updated All community emblems and flags for Atlas Rises
All other files deleted from release for now as they are not updated
Reward table removed because of current MBINcompiler bug and lack of necessity
Next update plan: update letters
Updated _CubeSnap for Atlas Rises, no issue

22/05/17 1.4.0 “Technological Advancement”:
Added 19 new decorations in Additional Decorations
3 “Server Stack” objects with snap stacking capabilities
The “Zyugeibaan” Server Stack Base needs to be built before servers can be stacked
Added icons to all added objects
Modified many object names into Ikea-esque names, also changed discriptions of some objects
Modified the tall hologram projector so that it actually touches the ground
Modified Korvax Traveler to make it spawn Korvax in non-Korvax systems, this is a temporary fix which only spawns one single particular Korvax
The bug is likely to be a vanilla one which cannot be fixed by modders
Fixed Large Rock 6 having the model of Large Rock 5
Updated “Grow Plants for Farming” compatibility to 2.0

15/05/17 1.3.4 “Spend Nanites, buy friends”:
Added 4 buildable NPCs
One of each race, one for current system which will change race depending on the dominant race of your current system
Added “NPCs” Category
Added “CREATEHOLOGRAM” in compatibility version, as per Kremit’s request
Fixed Amino Hub Emblem not showing up in creative mode (normal version)
Fixed one of the Globe Projectors’ globe not spinning

03/05/17 1.3.0 “The Sky, Earth, Man Update”:
Added 13 new decorations
Added 2 emblems
HOVA by GtaHov
Hello Games Logo
Renamed every added object, will be renamed again after adding icons
Fixed positioning of several decorations, allowing them to be placed closer to walls
Medbay Beds cannot be fixed because their animations would look trash
Fixed two wall lights so that actually give out visible light
Fixed the circular planter with screen so plants can be placed in it
Recategorised decorations
Restructured decals and flags file structure, greatly reducing file size
Pressed X

20/04/17 1.2.1: Added the blueprint of Direct Unified Materialisation Protocol (D.U.M.P.)™ Station into the base shop that was forgotten.